Irving, Texas, is a city in Dallas County. The city was founded in 1903 and named for Washington Irving, an author known for writing “The Legend of Sleepy Hollow” and “Rip Van Winkle.” It was incorporated eleven years after its founding. Today Irving has a population of over 240,000 residents, making it Texas’ 13th-largest community.

Irving is thirteen miles from Dallas and twenty-six miles from Fort Worth. This city is home to well-known corporations like Kimberly-Clark and ExxonMobil. It’s also where you’ll find the equine sculpture “Mustangs at Las Colinas,” the world’s largest sculpture of its kind. In addition, the city puts a large emphasis on the performing arts through its Irving Arts Center. The Irving Arts Center is a hub for ballet, theatre, symphony concerts, and more. There are over eighty parks here with a famous one being Victoria Park. This park has an amphitheater, a huge playground, a pond, and picnic tables. Irving Mall lets you shop to your heart’s content. It contains over 120 retailers including an AMC cinema. Whether you want to play a sport or take a class, you’ll be happy to know that the city possesses four aquatic centers and six recreational facilities. If you’re a cyclist or a jogger, you can get some exercise on the Campion Trail. This 13-mile multi-use trail grants you a scenic view of a river. Public schools in Irving are served by the Irving Independent School District, the Coppell Independent School District, and the Carrollton-Farmers Branch Independent School District. The city also has a few charter schools, private schools, and colleges.

The real estate properties in Irving are made up of townhomes, mobile homes, single-family houses, and apartments. The homes in Irving have an average of one to two bedrooms, and many of them were built during the years 1970-1999. Think about moving to Irving. It’s metropolitan, it has lots of parks, and it’s the namesake of a famous author. If you want more information regarding homes for sale in Irving, Texas, don’t hesitate to contact us.

INVESTORS! Tenants in place. Excellent location minutes from 183. Brick-faced Duplex with less than 2 yr old roof. Over 1,000 sq ft per side; each side has (2) bedrooms,...

Located in the prestigious Vue gated neighborhood connected to the Four Seasons - Las Colinas, in the heart of the DFW Metroplex. This 4 year old home is truly better th...

Courtesy of The Realty Associates

Listing courtesy of The Realty Associates.

Courtesy of Rogers Healy and Associates

This home offers a very great LOCATION centrally located and easy access to freeway Fully remodeled with upgraded flooring and ready to move in with a beautiful spaciou...

The ideal merger of location & space in a gated community is now ready for you to acquire! The Red River floor plan by Meritage was tastefully designed by the owners, off... 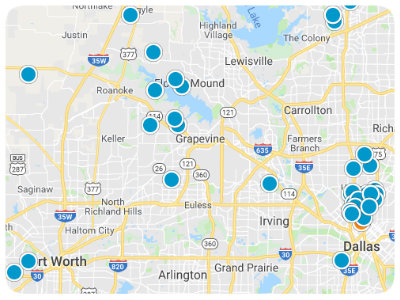